How to Tell Twins Apart 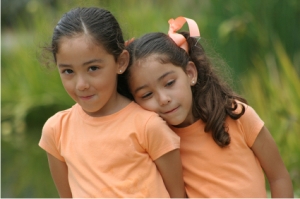 Wondering about how to tell twins apart? Many people who have an association with a set of twins, or just out of simple curiosity, often wonder about this. It's is a frequently asked question that parents of twins, especially identical twins, get. There are, in fact, several things that new parents of twins do to be sure they don't mix up their little duo...at least while they are infants and until they get to know them better. But that said, I still have yet to meet a parent of twins who could not tell them apart after the first few weeks of life (and in many cases even less time).

Tips and Tricks on How to Tell Twins Apart 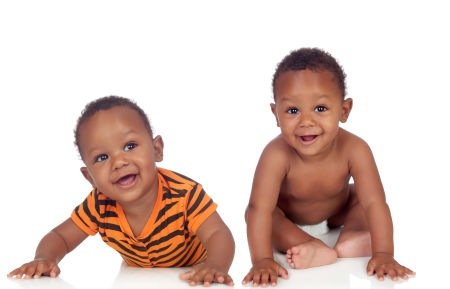 Twins are, indeed, individuals. Even if they're identical, they will each exhibit their own unique way of going about life. These differences may be harder to define in the early months, but personality will eventually shine through. Some will have very different personalities, which definitely helps in knowing who's who.

They will also likely have some subtle physical differences, like a birth mark, freckle(s), or a difference in weight or height. But, generally, when you spend as much time around a set of twins as parents themselves do, telling them apart is not an issue. And, don't think that the matter of telling twins apart lies only with identicals. Many fraternal twin sets look strikingly similar as well!

The tricks of the trade, so to speak, that parents have implemented to help tell twins apart are simple and effective. Some of the most common being color coding each twin's clothing (i.e. Adam wears blue while Kyle wears green) or using separate patterns, like stripes and solids. Another simple trick is painting a toenail, or merely leaving their hospital bracelets on for a time.

Other techniques include using different hair accessories or earrings, different color socks and even name tags. These things will also help other family members and friends when they are having trouble with how to tell your twins apart (when they're little anyhow), so try to make it easy on them!

We highly recommend using some easy to stick labels. There are lots of companies that make personalized labels for everything from clothing to lunchboxes. They can usually be ironed on, or in some cases just stick and go!

Keep in mind that if your twins are extremely similar in appearance, most people (aside from you) will always struggle with knowing which is which. It happens all the time with my own identical boys, but they're getting too old for me to use the tricks I've noted here!

A video on the weight difference between the Sprouse twins.


Read about The Beauty Of Nailpolish in telling twins apart...

Here's a super funny vintage ad on How to Tell Twins Apart...

Home › Identical or Fraternal › How to Tell Twins Apart