Are they identical twins or fraternal twins and what is the difference? This is certainly one of the MOST asked questions by parents of twins and the general public in regard to twin zygosity. 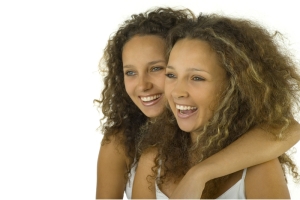 Identical twins (monozygotic) occur when a single egg, fertilized by a single sperm, splits into two identical halves. Two separate babies with identical DNA are formed. Only about 1/3 of twins are identical while 2/3 are fraternal, making identical twins the rarer of the two.

Identical twins are always the same sex (except in rare cases) and blood type. They almost always share the same placenta but may also have two separate placentas, as well as amnions and chorions. The placentation of twins usually depends on when the egg splits.

Twins are always identical when they share the same amnion and chorion, known as Monoamniotic-Monochorionic or Mo-Mo/Mono-Mono Twins. The split will most often take place within the first few days in this type of pregnancy.

However, here are some interesting facts:

Identical twins can be strikingly similar in their appearance, but this is not always true due to environmental factors and not genetics alone. Many identical twins are relatively easy to tell apart.

Indeed, plenty of parents of twins will resort to twin DNA testing to know for sure. Also known as Twin Zygosity Testing, this will determine if your twins are identical or fraternal with staggering accuracy. This DNA testing for twin zygosity is easily done by taking swabs from the mouths of each twin and then sending to a lab for analysis.

Another curiosity is identical twin fingerprints, so be sure to read our separate article on that topic.

An additional question on the subject of identical twins will typically be, "Why identical?". Currently, the scientific community does not have a definitive answer to why one egg splits spontaneously, but they do consider identical twinning to be non-hereditary. Meaning, having twins in your family will make no difference in the possibility of conceiving identical twins. Identical twins seem to occur randomly, though constantly, throughout the population without rhyme or reason. You can read more about the incidence of multiple gestations.

Read our article about how to tell twins apart...

Fraternal twins (dizygotic) occur when two separate eggs are fertilized by two separate sperm. Two separate babies with no more in common than siblings born at different times are formed. About 2/3 of twins are fraternal.

Fraternal twins can share many similarities in appearance just like any brother or sister of the same family. Though, I have known fraternal twins that were in fact difficult to tell apart. A great example of this is the famous Olsen twins (a.k.a. Mary Kate and Ashley), who claim to be fraternal twins. Generally though, fraternals are distinct enough to recognize who is who with ease. And it's a no-brainer when they are of different sexes!

Now on to the "why" factor.

Fraternal twins are actually the most common type of twinning.

While identical twins happen for no apparent reason, fraternal twins come about due to a number of factors, like hyper-ovulation, age of the mother, fertility treatments, and hereditary influences.

Hyper-ovulation (releasing two or more eggs at one time) will result in fraternal twins or multiples when all of the eggs are fertilized during that one cycle.

Because this glitch of mother nature can be inherited, it is not uncommon to have several sets of fraternal twins throughout many generations in one family. See Odds Of Having Twins.

It's a common misconception that twins only come down through the mother's side. But in fact, hereditary factors can be passed on from the father's side to his female children.

To put it a bit more simply, the male only provides the sperm, whereas, the female is the one who either ovulates two eggs (fraternal twins) or one egg that splits (identical twins).

That's why a woman can still inherit the hyper-ovulation gene from a grandmother, aunt, etc. on her father's side. However, her father would not have had any hereditary chance of having twins himself when he had his child/children. Make sense? I know, it's so confusing!

And yet another growing cause of fraternal twins is the use of fertility treatments. If you are undergoing these treatments, your doctor will have already informed you of the possibility of a multiple birth.

It should also be noted that there are more twin pregnancies documented in women of African decent and less in women of Asian decent.

Are They Identical Twins or Fraternal Twins When They Have Different Skin Colors? Check Out This Video...