Keeping Your Sense of Humor When Expecting Twins
by Joel Frieders 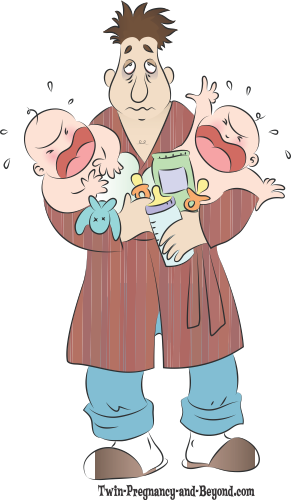 I've read so much crap in the past four weeks I think I'm ready for a break from this constant barrage of NEW INFORMATION. It's like one person tells me one of their bright ideas and all of a sudden I'm researching for sources of said idea and hoping to jot it down on here to remind myself when the twins are here and screaming their heads off.

Then there are the a-holes you run into every once in a while who like to dig at the fact that we got one more baby than we planned for coming. "Whoa! Double trouble!" "They'll be a handful!" or my least favorite: "That sucks!"

Really? It sucks? I've experienced pretty much every feeling you can have when freaking out about having two babies added to my family at once, but never that it sucked. Not by a long shot!

I have no choice to fall back on my HA HA as a source of support because it's always been there. Even more than some of my best friends, I can always appreciate a memory that makes me laugh or know that I can instantly find something to make me laugh to pull me out of a funk right quick.

And hell, here's the weird part: Since finding out that we are having twins, I can't imagine the last time I let a day be completely ruined by being pissed off.

So I've devised three steps to keep your sense of humor that I'm going to plaster onto the bottom of my underwear drawer to read every day. Do you see why it's funny that I can do that? I DO THE LAUNDRY NOW, SO I WILL ALWAYS SEE THE BOTTOM OF THE DRAWER BECAUSE WE NOW LIVE OUT OF BASKETS.

Three Steps to Keeping Your Sense of Humor When Expecting Twins:

1)  Reward each decision with a high five. And I don't mean a s**tty regular high five, I mean, JUMP UP IN THE AIR, SAY "YEAH!", AND FIST PUMP AFTERWARD high five. *We just decided on a budget for between now and TDay (twin invasion day) that will help us have some extra cash when we are both home for those two weeks. HIGH F***ING FIVE LADY!

2)  Nothing should be rushed. Slow the hell down you bald son of a pharmacist. *This morning I'm almost out the door, lil guy grabs a book and backs up into me, that's his sign to read him a book. I left the truck running and finished the book, TWICE.

3)  Appreciate your alcohol. *See, I'm a home-brewer, which means I can be a beer snob. So, rather than buying a 24 pack of ass beer, I buy a 6 pack of the highest quality brew I can find, and I enjoy them by themselves, on their own, giving them their own day. By making the lovely and delicious beer a reward for a day not stressing, I can exercise my palette and remain in touch with my college days. Except now, I eat full meals instead of combos, milk and the occasional donut.

You just read this! HIGH FIVE!

You can read more from Joel via his website HavingTwinsNow.com

Home › Dads of Twins › Keeping Your Sense of Humor