Rare and Unusual Types of Twins 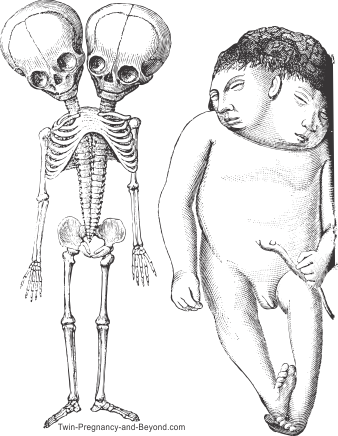 There are a few rare and unusual types of twins that you may not have heard of. Most people know about identical and fraternal twins, and even conjoined twins. But have you ever heard of chimera twins?

In this interesting article we will discuss the different types of twinning that can occur that many people don't know about or don't know the facts about.

Scroll down for more...You are sure to learn something new!

A List of Rare and Unusual Types of Twins

This type of twinning is so rare that only two cases have ever been discovered and some experts say we may never see another one.

In 2007 scientists revealed the world's first case of semi-identical twins who were born in the United States, but remain anonymous.

It is said that they were the result of two sperm fertilizing one single egg. The egg then divided to form two separate embryos with genes from each sperm making the twins identical on their mother's side, but with only half their genes on their father's side.

More recently, in 2015, the second case was discovered with testing while the twins were still in utero. These boy/girl twins were the first semi-identical or sesquizygotic twins born in Australia.

The following video does a great job of explaining this extremely rare type of sesquizygotic twinning:

The term monozygotic describes twin pairs that develop from only one zygote that then splits to form two embryos. These types of twins are always the same gender, unless a very rare mutation happens in male twin pairs where one loses a Y chromosome and develops as a female.

The female in this case would be described as having Turner's Syndrome, in which case she will not mature naturally because of missing genetic material. There are varying degrees of Turner's Syndrome and each female will develop differently.

While this interesting type of twinning is still just a theory, it does provide food for thought.

The prediction is that a woman ovulates a single egg that splits and is THEN fertilized by two separate sperm resulting in "half-identical" twins.

The twins in this case would both have identical DNA from the mother, but varying DNA structures from the father's side.