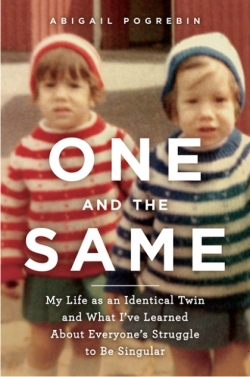 Since my book about twins came out October 20th, 2010, I've been asked the same two questions over and over: How does being a twin affect my parenting, and what would I advise parents of twins, based on my two years of research, numerous interviews with adult twins, and my own twin experience?

My first answer is: *spend separate time with each child*. It may seem obvious, but so many parents of twins don't do it because they see how happy their twins are together, because they don't want to intrude on their effortless bond, or because it's just plain easier to take two at a time. But listening to my sister Robin tell me that she's not even sure to this day that our parents truly know us apart and that she has struggled with a sense of distinction in the world made me very clear that individual time can make the individual. I am now hyper-aware of spending separate time with my two children, who are 12 and 10 years old. I make sure to wander into each of their rooms at odd times, and just flop on the bed and see what they have to say, or to take just one of them out for a meal. I know how the rough-and-tumble of life often gets in the way of independent outings: we're all rushing to the same activities or taking the same trips together. There isn't always that open-ended time to just chat or take a walk with no particular destination in mind.

My sister admits in my book that one of the reasons she didn't have a third child was because she missed separate memories with our parents and didn't want to risk having too little time for too many kids. It should be said that we had a wonderful, colorful childhood, and I think Robin wouldn't trade it. But the absence of undivided time resulted in a muddying of Robin's sense of self, and now that I've spoken to so many experts, I understand how common and problematic that can be.

The other advice I'd offer is to resist comparisons. They're so tempting, but so destructive. Believe me, siblings will inevitably measure themselves ceaselessly, without a parent's prodding. So many of the twins I spoke to said they were aware of who was favored, or what their convenient labels were "the athletic one," "the brainy one." All those tags did in the end was make them feel boxed in.

One of the major themes that came to me in the process of writing this book is that twins are also muffled by everyone's investment in their perfection. Yes, twinship is a kind of utopian intimacy, but it isn't always idyllic, and there has to be room for chinks and conflicts. Psychologist Joan Friedman talked about the pressure on twins to be constantly equal and constantly unambivalent about being twins, whereas that same expectation isn't there for non-twin siblings. Sometimes one twin won't get invited to the party and parents have to restrain themselves to try to "make it right" and get the other twin included. Life isn?t always fair, and twinship shouldn't confer an unrealistic sense of the world. Robin and I were ill-prepared for imbalances and we sometimes didn't know how to handle them when they happened.

So that's my guidance from a front-row seat on twinship: Spend separate time. Don't label. Don't compare. And let the relationship be a real one, with all its bumps and disparities.

Being a twin emboldened me, supported me and protected me. But I understand now that it's also more complex than some want to believe, and parents should be the first to let the complexities breathe. Your twins will be better adults for the honesty.

You can learn more about Abigail Pogrebin and her book at AbigailPogrebin.com