Childproofing With Multiples
A Tale From a Mom of 3 Boys 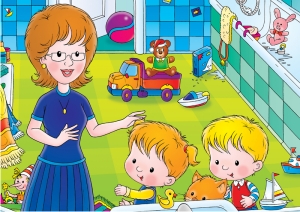 There's a school of parental thought that says childproofing is anxiety-driven and largely unnecessary. A recent article on Babble, for instance, argues that babyproofing is "overparenting". Many of the comments agree.

I do too, in theory. I agree that children should be taught, through trial-and-error and through parenting, what is safe and what is not. I also agree with the larger movement to allow kids more freedom to roam, tinker and explore.

However, a laisser faire approach to childproofing with multiples simply doesn't work. At best it's chaos; at worst it's dangerous.

Why I Think Childproofing With Multiples is a Must:

Just last week, my son, Thomas, sent me on a scouting mission in the backyard. He had deposited a poo in some undisclosed location. I returned from this mission within minutes, object in hand.

Entering the house, it was strangely silent and the fridge door was wide open. I then heard small noises in the living room. My twins, Alex and Jon, were planted on the couch, sharing a liter bottle of blueberry juice and chatting like they were hanging at the local pub. Not a tragedy perhaps, but a real pain to clean up.

We've had many, more serious events.

In a flash, Alex climbed to standing on the kitchen counter, rummaged on top of the microwave, found the "panic button" for our security service and pressed it  holding the button down the required two seconds to send armed response racing to our house.

Ah yes, and Thomas carefully demonstrating to his younger brothers how to place ones neck in the cord for the blinds and lean on a 45 degree angle. "I'm choking!" he says, to complete the lesson.

So we've put put a clasp on the refrigerator door, we wind up the blind cords every morning, and we've stored the panic buttons so high as to be completely useless.

The days are too short  life is too short  to spend my time mopping up a liter of juice, placating the security company, or whisking the kids into emergency. So until we have as many watchful adults as roving children, we will continue to lock it, hide it, gate it....

Here's some more baby-proofing with multiples ideas from Pinterest...