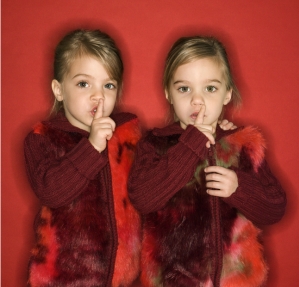 Twin language or twin speech is often referred to as autonomous language, cryptophasia, or idioglossia. They are all types of communication systems, most commonly occurring in twins. With the exception of cryptophasia, they may also transpire between singletons and between other siblings of multiple births. Basically, this phenomenon describes the way two or more close siblings use words and/or gestures that are largely unrecognizable or even completely unintelligible to others. This is not necessarily a rare occurrence, but more of a misunderstood one that has fascinated parents of twins and the general public for years. However, new studies may shed some light on this intriguing subject.

How and Why Twin Language Develops

Well, in reality it's very rare that twins develop a genuine "language". More commonly, twin language consists of one twin modeling the undeveloped or muddled speech pattern of their co-twin. This then results in the flawed use of speech sounds and grammar by both twins which may then give the perception of a "secret language". This also seems to be intensified amongst identical twins. Hence, the word cryptophasia, which specifically describes the unique occurrence of language developed by identical twins. Given their special twin bond, it makes sense.

It should also be noted that circumstance plays a role in twin speech development. Some studies imply that premature twins or twins with low birth weight may have a higher incidence of delayed speech and/or idioglossia. And, most health care professionals agree that boys (twins or not) tend to speak a bit later than girls. Then of course, you have to factor in the language of the parents or guardian having the most interaction with young twins. If this "model language" is absent or lacking, twins tend to use each other as a model instead which leads to the inaccurate use of grammar as mentioned earlier.

One mother of twins was told most accurately by the pediatrician:
Your twins already have three strikes against them in terms of speech development. They were preemie, they are boys, and they are identical!

Taking the time to read to twins regularly can play an important role in their language development, as studies have indicated this. Creating a language-rich atmosphere, such as talking about what you are doing while doing it, may help twins associate words with actions. The use of "baby talk" should be avoided for obvious reasons. Instead, when a word is pronounced incorrectly, try repeating it back the correct way while emphasizing each syllable. Always encourage twins to use actual words rather than gestures or sounds to tell you something. For instance, if they gesture or grunt for more juice, try asking, "Do you want more juice?" before just handing it over. Play time with twins is another great opportunity to help them with speech by naming each toy, color, or shape. Lastly, if you ever have concerns regarding your twins speech development, contact your pediatrician or a speech-language pathologist for help and guidance.

Check out our article on how to teach twins sign language...

Learn about the bond between twins...