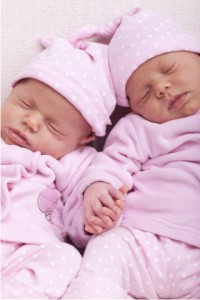 Finding out you are having twins is almost always a total shock. Finding out you will be raising identical twins, well, now you really have something to think about. Thoughts about telling them apart, fostering individuality, reactions from the public, etc. are just some of the things that may be circling through your mind. And although you're not alone, there's not the plethora of information on this type of parenting compared with singletons or even other types of twins. Not that raising identical twins needs to be rocket science, but it is a rather rare situation which will have some unique challenges.

So, how do you know they're identical in the first place? Your first clues will be if they are of the same sex and blood type, and also if they look similar. If you had what is known as a "Mono-Mono" twin pregnancy, well then you already know that your children are identical without a doubt. But for some of us, it's just not that clear.

Identical twins can have separate sacs as well as placentas during pregnancy. And, fraternal twins can sometimes have their placentas fused together during pregnancy which makes them appear as one at birth. Sound confusing? It can be. The most reliable way to determine if your twins are identical or fraternal is with twin zygosity testing. It's a simple DNA test that can be done from home with lab results within a couple of weeks.

Now that you have found that you will, indeed, be raising identical twins it's time to talk about some of the distinctive aspects of parenting them...

How Raising Identical Twins Will Be Different 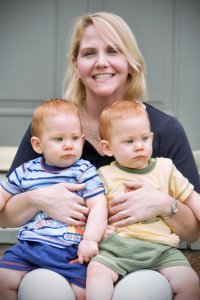 From the start, many parents fear they will get their babies mixed up or not be able to tell them apart. A valid concern, but once you have spent some time with your twins you will see how quickly you will be able to recognize their subtle differences. This can be in personality, looks or both. I have never met a parent of identical twins that couldn't tell them apart, myself included. But, here's our article on telling twins apart, just in case!

What about clothing? This is a biggie with some parents when it comes to raising identical twins. Will you dress them the same or different? Generally speaking, dressing your identical twins the same when they are very young can be cute and fun and offer great photo opportunities. But most parents would probably agree that continuing to do so into the school years is not the best idea. For one, it could be terribly hard for teachers to tell them apart.

It is the way others view them as well as how they view themselves though, that you should think about. People already tend to see twins as a unit, so the matching clothing just reinforces this. You also want your twins to feel like they have their own identity even though they are being raised with someone who looks exactly like them. When they are old enough to decide for themselves they might still choose to dress the same, but it will be their own decision. 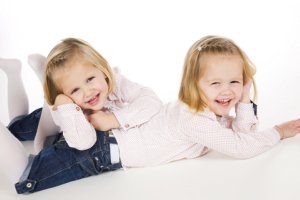 When raising identical twins, you will likely been keenly aware of the bond that starts to develop between them. It is said that the bond between twins is a strong one, especially with identicals. But, don't get discouraged if your twins don't start out this way. It may take time for your twins to discover that they have a built-in play mate. They are certainly aware of each other from birth, but taking the next step of interacting, playing and enjoying each other's company can take time in some cases. Just because they're identical twins does not necessarily mean they will be the best of friends from the start.

Identical twins often times have the same mannerisms, preferences, disabilities, and illnesses. The extent of this will vary, of course, but it is something to be aware of. If you find that both of your children want to play football, join the chess club, learn ballet, etc., let them. Don't feel you need to establish their individuality yourself by making them choose separate activities. Some identical twin studies have shown that these preferences are built-in. And, heaven forbid, you find you have one twin with an illness such as cancer or the like. Pay close attention and ask questions, as this could possibly be an early warning for the other twin.

The Crazy Questions You Get When Raising Identical Twins 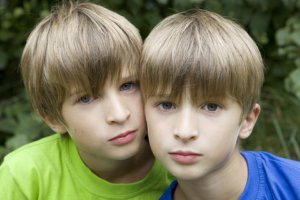 Lastly, let's talk about all of those silly twin questions you will get from strangers. Identical twins sure have a way of drawing attention! When you're out and about with them it will likely become commonplace for total strangers to stop and ask you if they are twins, if they are identical, if they are "natural", and so on. Although these questions can grow pretty annoying very fast, keep in mind that most of the public does not completely understand the identical twin phenomenon. It is their intrigue that keeps them asking. It wouldn't hurt to have some answers ready for quick responses that won't keep you held up all day.

All in all, raising identical twins will be an experience personal to each family who has them. Embracing both their similarities as well as their individual traits, giving them equal love and attention, and using your parental instincts will surely help you along this unique journey.